Ethereum has been able to significantly extend that uptrend that it first incurred while it was trading around $230.

After surging from these multi-week lows and smashing all the resistance levels that existed throughout the upper-$200 region, the crypto has since reached its high time frame resistance at just below $360.

The intense selling pressure found here has slowed its ascent, with Bitcoin also finding some resistance at $11,600.

Analysts are now widely noting that a pullback could be imminent for both Bitcoin and Ethereum, as they may need to garner greater support amongst their buyers before they can push any higher.

Overnight, the largest digital assets extended their recent uptrends as they rallied into their key high time frame resistance levels.

Ethereum – which may be the primary force pulling BTC and the rest of the market higher – was able to push as high as $260 before facing a firm rejection that led it back into the lower-$350 region.

From this point on, it has been consolidating.

Similarly, Bitcoin was able to rally to its high time frame resistance around $11,800, but the visit to this level was also followed by a sharp decline that led it down towards $11,500.

Analysts are now expecting both BTC and Ethereum to see a pullback in the near-term.

“All three majors – BTC, XRP, ETH are at HTF resistance here. I think we see a pullback in the coming days,” one prominent trader noted.

ETH is Trading at a Crucial Level

Ethereum's present resistance coincides closely with the original upside target that came about as a result of the descending trendline break that sparked its recent parabolic rally.

“Target reached, thank you for playing,” one analyst berkata while pointing to this target. 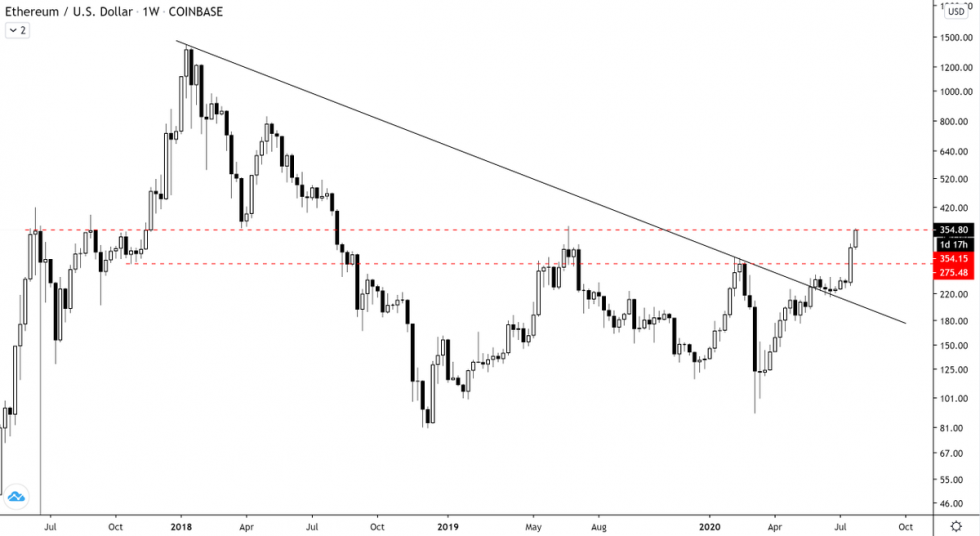 Because this target has been reached and Ethereum is struggling slightly to maintain its momentum, its intense uptrend may need to see a pullback before it can extend even further.